The EURO Meets NeurIPS 2022 Vehicle Routing Competition brings together researchers from operations research (OR) and machine learning (ML) to address the vehicle routing problem with time windows (VRPTW) as well as a dynamic VRPTW. 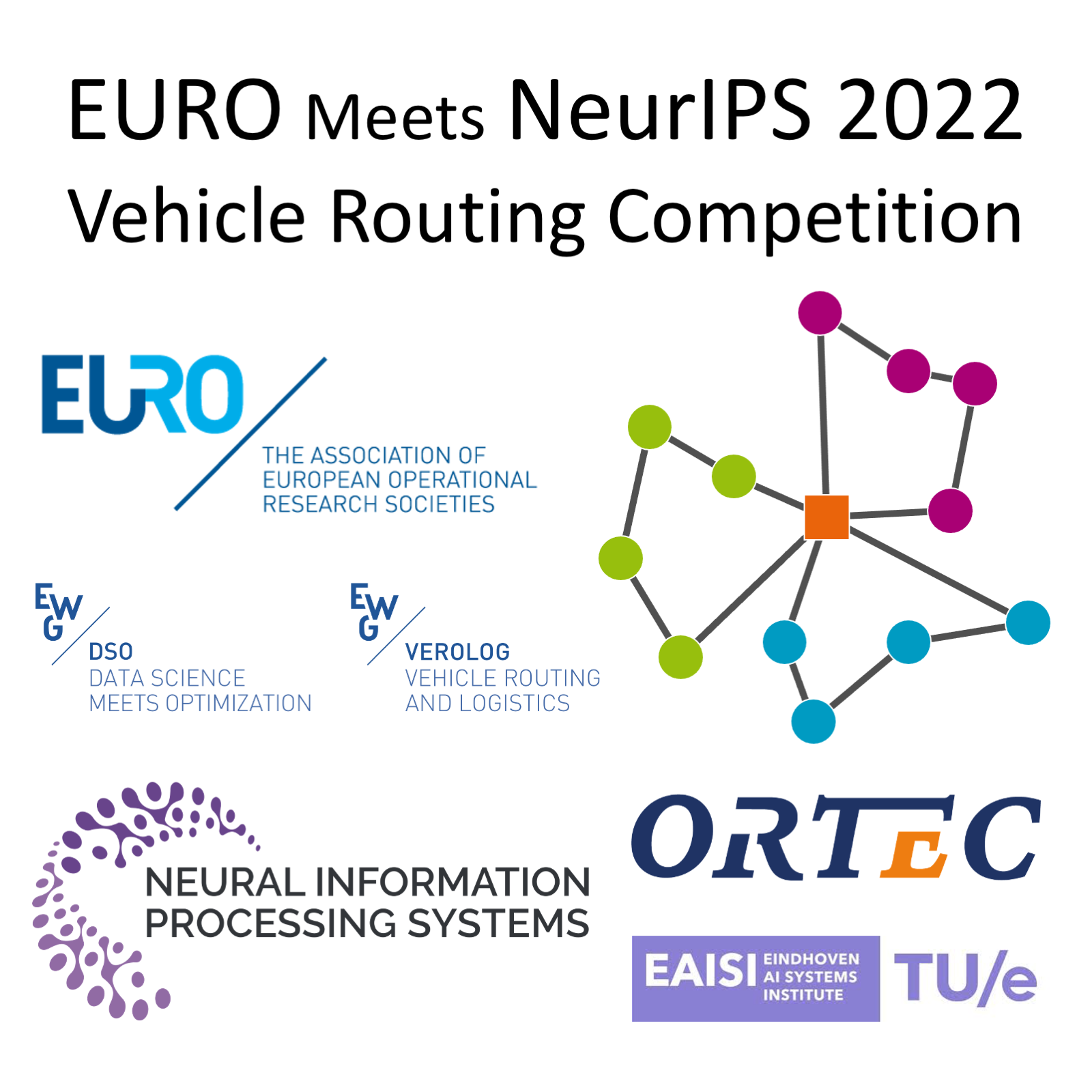 Solving vehicle routing problems (VRPs) is an essential task for many industrial applications. While VRPs have been traditionally studied in the OR domain, they have lately been the subject of extensive work in the ML community. This competition is a joint effort of several previous competitions, that brings together the OR and ML communities to solve a challenging VRP variant on real-world data. The challenge focuses on both a 'classic' deterministic VRP with time windows (VRPTW) and a dynamic version in which new orders arrive over the course of a day. As a baseline, we provide a state-of-the-art VRPTW solver and a strategy to use it to solve the dynamic variant, thus ensuring that all competition participants have the tools necessary to solve both versions of the problem.

This competition considers the vehicle routing problem with time windows (VRPTW) as well as a dynamic variant in which new orders arrive during a day. All submitted solvers compete on both problem variants, which is facilitated using baseline strategies provided.

The VRPTW problem considered in this competition is the same as in the DIMACS VRPTW challenge except that we use real-world instances provided by ORTEC, with an explicit duration matrix providing (non-euclidean) real world road driving times between customers. The number of customers is between 200 and 1000. Each customer has a coordinate, a demand, a time window and a service duration, where service must start within the time window. A vehicle can wait when it arrives too early at a customer, but cannot be late. The total demand of customers served by a vehicle should not exceed the given vehicle capacity. Following the DIMACS convention, the objective is to minimize total distance, as measured by pure driving duration (thus excluding waiting time). There is no practical constraint or objective regarding the number of vehicles.

For the dynamic variant of the problem, requests arrive at different 1-hour epochs during the day. The solver, or agent, can choose which requests to dispatch in the current epoch, for which it must create feasible routes, and which ones to postpone to consolidate with new requests that may arrive later. Some requests are must-go requests that must be dispatched during the current epoch as delaying them will render their time window infeasible. In the last epoch, all request are must-go. An environment will be provided that samples the locations, demands, service times and time windows of requests uniformly from the data of a static VRPTW instance. For the dynamic variant, the static instance thus provides a 'customer base' from which requests may arrive, and this information can be used by the solver. The solver should be able to interact with the environment through a controller script, which will be used for final evaluation of the solver.

Solvers should provide solutions (per epoch) within strict time limits and are allowed to use a single CPU core, as well as a single GPU. Details will be provided at the start of the competition on July 1st, when a quickstart repository will be released. This repository contains a set of instances, an implementation of the environment and a baseline, which can be used by participants to develop their solver.

Note: to be eligible for prize money, participants should open source their solver. Leaderboard prizes will be paid at the end of the competition, only to teams with a minimum of €100 total prize.

The detailed rules of the competition, including a detailed description of the problem, provided environment and baselines can be found here (version August 2nd).

This competition is a joint effort by the organizers of previous vehicle routing competitions: the VeRoLog 2017 and VeRoLog 2019 solver challenges, the 2021 AI for TSP Competition and the 2021/2022 DIMACS Vehicle Routing Implementation Challenge.